Posted by Admin on 29th June 2016 in Club News, Tournaments

Dating back as far as 1851, the Leamington and Midland Counties Archery Meeting is the second oldest fixture in the archery calendar. The main championship is a two-day shoot, gentlemen shooting a double York, ladies a double Hereford and juniors double Bristol. However, no need to attend both days because medals are awarded for single day entries as well.

Once upon a time money prizes starting at £8 were awarded, a lot of money in the 1800s. Today’s top prize is a very grand silver mirror for the ladies shooting a double Hereford and the Fisher cup for the gentlemen shooting a double York. 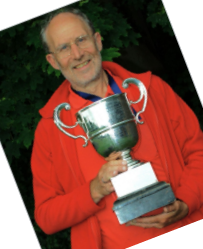 At last year’s meeting I managed 2nd place in the double York. This year I almost stayed in bed after seeing the weekend weather forecast. Almost. Instead I joined the other archers to battle the elements: rain & gusting winds for 2 days, finishing with a full-blown thunderstorm just after the last arrow was shot. For this I was rewarded with 1st place and having my name engraved for posterity on the historic Fisher Cup. I wonder if it’ll still be there in another 165 years? As a little bonus, my score was good enough for a new Gwent County record and 3 Welsh National records. And if you believe the ancient inscription on the cup, I’m now the Midland Counties & South Wales champion.

And even: evening archery practice.

For more information on this tournament see: http://www.rlsas.co.uk