Posted by Julian Cleak on 2nd December 2021 in Club News

An updated Equality & Diversity Policy has been added to our documents section, please click the About Tab to view.

Posted by Julian Cleak on 2nd July 2021 in Club News

Are you looking to get back into Archery?
A simple refresher session can soon get you back up and shooting
To Book your session please email the club secretary
We’d like to reassure you that our club and coaches follow Archery GB’s Covid-safe guidelines.
We’re ready to welcome you back to help you achieve your sporting ambitions in a socially distanced but fully supportive environment.
o find out more about being a range returner visit Returning to Archery | ArcheryGB

Posted by Julian Cleak on 26th September 2019 in Club News

Our next Beginners Course will be on 20th/27th October 2019
Starting at 11am.
This course will be at the Caerwent Community Hall.

Please book places via our contact form or waitinglist@st-kingsmark.co.uk

Posted by Julian Cleak on 1st August 2019 in Club News

The St Kingsmark Bowmen (and women!) were invited to Devauden village fete to put on a display and a ‘have-a-go’ session. It is a traditional village fete and all the money raised goes towards the local village hall and church. The fete has been running for many decades and is always popular with both villagers and others from further afield. It has a reputation that is the envy of the other fetes locally due to its combination of traditional attractions and quirky entertainment (including dangerous animals and reptiles, a magician, alpacas and archery!).

The archery was a very welcome attraction with over 100 members of the public enjoying it. There were even some competitions between families; these were always interesting to watch! The archery talk was a great success (even if I do say so myself – I gave it). The talk was on the different types of bow and the different types of archery. I also talked about the history of archery and how it has changed through the years. Some of the archers then demonstrated the various types of bow and their shooting was admired by all.

I would just like to thank the coaching team and all the other archers that helped make the day a great success. I think both the public and the archers enjoyed the day. I also think that the archery talk went well and drew a big crowd. Finally, I would like to thank the archers that demonstrated the bows for the talk. I believe that the talk was largely responsible for the 50% rise in the number of people who ‘had a go’! 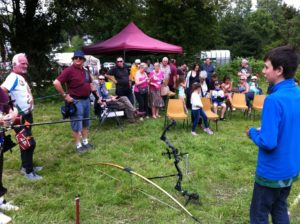 Posted by Julian Cleak on 6th July 2019 in Club News

There is an error with the Contact Forms at the moment that is preventing them being sent, please send any messages directly to info@st-kingsmark.co.uk for the time being.

Hopefully this is now fixed.

Posted by Julian Cleak on 2nd July 2019 in Club News

A new catalogue of club clothing is now available to view in our “About/Club Colours” Page together with a new order form.

Posted by Julian Cleak on 4th May 2019 in Club News

Posted by Julian Cleak on 6th March 2019 in Club News

Pentref Bowmen have added a new shoot to their Field Archery Calendar, this is the Summer 3D Shoot.
For those of you that enjoy 3D archery this Summer Tournament will qualify as one of the AGB 3D selection shoots in the UK.
The shoot takes place on 20th & 21st July 2019 at Pentref Bowmen, entry forms are on the tournament calendar elsewhere on this site.

Posted by Julian Cleak on 18th November 2018 in Club News

Entries to the WA-18 Tournament in January can now be submitted by using the Fill In & Print Form available here. Please download it to you device and then complete it and either e-mail it to the Tournament Organiser or Post it in the normal way with your cheque. If you wish to pay be electronic transfer please e-mail the organiser for details.

Posted by Julian Cleak on 19th October 2018 in Club News